Four in the Bush 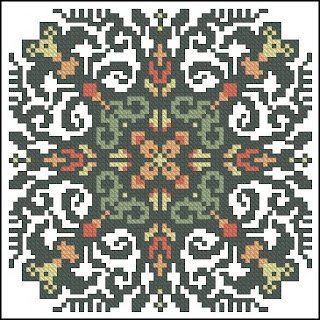 Happy Halloween.  Trick or Treat?  If you picked treat, you may download this chart for free.  It's show in 5 colors, but it actually looks quite cool with just the darkest color stitched.  Darkest color requires 2 skeins.

A Tiny Bit of Growth

Linda Barry stitched this tiny masterpiece on 40 ct. linen over 2.  Once again, Vikki Clayton's Hand Dyed Fibers steal the show.  What a lovely combo - it's Marque des Cercles and Garnet.  This chart is called Growth Rings and is currently only available in the March/April 2009 JCS Magazine issue. 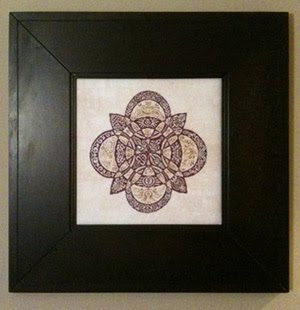 After completing the delicate stitching, Linda cleverly repurposed a framed mirror from Target to create this bold finish.  It's always so nice to get such a high-end framing job look without paying through the nose!  Any stitcher I know has a few better places to spend their money.

Trivia time: Did you know where the name  "Marque des Cercles" came from? Vikki's silks all get such interesting names!  This one is a tribute to Marc Davis and his use of DMC 111 in stitching the chart Cirque des Cercles. 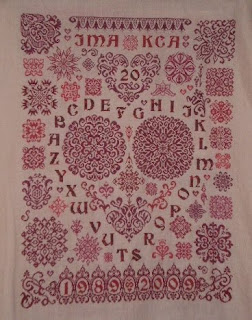 Twenty years ago Katie said, "I Do" to JMA.  And now, two decades later, they still love each other - even considering her addictive hobby of making endless rows of little x'es on giant pieces of fabric.

To celebrate and commemorate, Katie used assorted DMC and Carrie's Threads on Flax colored 28 count Cashel Linen to stitch I Still Do.  Undertaking this project is no namby-pamby event, but neither is marriage. Congratulations on your success in both, Katie!

I'll try to have something equally spectacular from Ink Circles around when they hit their 50th.  Meanwhile I send my wishes that they may enjoy each other's company and enjoy having this heirloom on their wall.

Email ThisBlogThis!Share to TwitterShare to FacebookShare to Pinterest
Labels: I Still Do

My Mum Is a Star 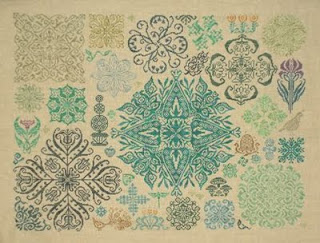 This is Garden Stars, as wrought by my Dear Mum. She used an assortment of Carries Threads, adding in a spot or two of color where she felt like it.


Garden Stars was actually one of the first designs published by Ink Circles. Rather than take the year it would have required to get models physically stitched for my first few charts, I took the short cut of using a computer generated picture for the leaflet cover. If I had it to do over, I'd do it the same way, but if I need to have Garden Stars reprinted you can bet that I will upgrade the cover to this beautiful model!

This chart predated my introduction to over-dyed thread so it called for the ubiquitous DMC. Later, developing a conversion from DMC to Carrie's Threads was an entertaining and growing process for both Carrie and me. She had only a handful of greens in her color line at that point, so you can imagine her reaction when I presented this chart with its twenty-odd shades of green. Actually, imagine any individual dyer being asked to do that - can you see their faces turning a bit greenish. At a minimum their hands would be green. Carrie rose to the occasion wonderfully and today her color line reflects those efforts.
Posted by Tracy at 11:08 2 comments:

This Heart of Barbara's 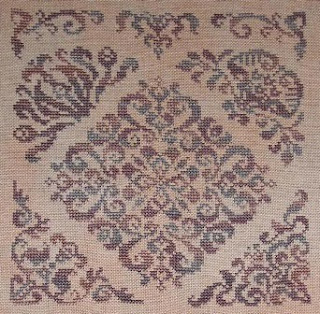 This is the same color combo used in Growth Rings and it looks just as smashing on this piece.

Email ThisBlogThis!Share to TwitterShare to FacebookShare to Pinterest
Labels: THOM 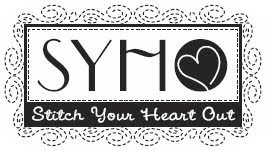 Ink Circles is proud to be participating in the Stitch Your Heart Out Campaign.  One aspect of this campaign is to have 12 different designers make special charts in a series, to be released once per month.  If desired, the projects could then be combined into a special "designer encyclopedia." The lovely month of August, 2010 will be the 7th of 12 installments and will be powered by INK CIRCLES.  I am just tickled to have been invited to participate in this first year.

The campaign is designed to promote women's heart health awareness and will directly support a charity called Carol for Heart. More info on Carol for Heart is on that SYHO website.

Stay tuned for updates on this campaign.  In addition to the 12 new charts, there will be much fun for stitchers and non-stitchers, as well as a few surprises to be announced.
Posted by Tracy at 18:05 1 comment:

Email ThisBlogThis!Share to TwitterShare to FacebookShare to Pinterest
Labels: SYHO

How We Do It in These Parts

Michelle is a native Texan, where they know a good cowpoke when they see one.  She changed the color scheme a little bit to fit her decor and stitched them on these adorable bandana-trimmed pillows.  Meet her custom Beau Leggy and Calamity Pippi! 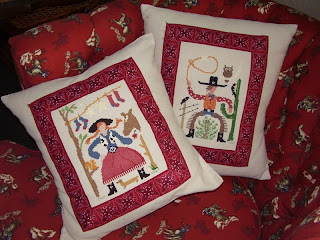 Pat in New Mexico shows us her version of Cirque des Cercles.  Isn't this a beautiful combination!  Well deserving of the Blue Ribbon she won in the Southern New Mexico State Fair.  Check out Pat's blog to see more of her stitching here. 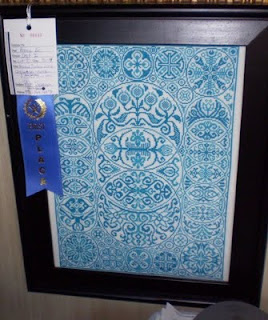 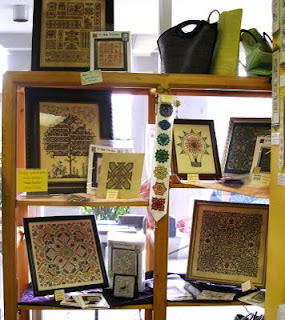 Here it is the 23rd already! How did that happen? The Online Needlework Show that ended last week went just swimmingly and things have wrapped up there with the exception of the couple hundred door prize messages still in the inbox. I was able to keep up with them the first few days, but as orders came in (and I played hookey for the weekend) they piled up until their inertia held them fast. I'm a glutton for punishment and asked for meaningful input the I intend to read, not just a "send me your name and I draw randomly" scheme. So - there is still hope if you entered!


My trip that weekend was to visit my not-so-local Local Needlework Shop in Portland - Acorns and Threads. They were having a grand Open House Event that I was lucky enough to coincide with my Ink Circles trunk show there.

All of the new models were unveiled to a crowd that was big enough I was concerned what the Fire Marshal's opinion might have been. Of course, the stitchers were there not just to see my stuff - there was a wagon load of new things brought back from the St. Charles market and a few other guests of honor! 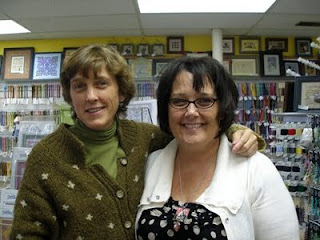 When the throngs finally had their way with the interceding pile of limited edition Belle Soie skeins, I got to meet Sharon Crescent. She had a number of lovely models done up in these lovely silks. Maybe it's because I am reading The Maltese Falcon, as part of our "The Big Read" library program, which makes me think of Bogart, who in a different movie (Casablanca, of course) says the phrase that comes to mind. "I think this is the beginning of a beautiful friendship." 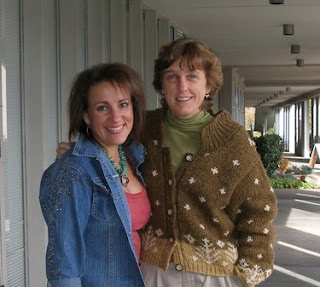 I was also lucky enough to meet fellow designer Jamie Beam of Knotted Tree Needle Art. Acorns & Threads was her old stomping grounds, but it turns out that her current home is only an hour away from me. We won't have to drive four hours each to meet up next time (which will be soon, I'm sure)! 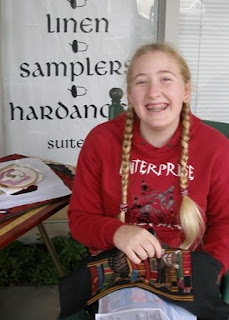 I hardly put a needle to cloth the whole weekend due to all this gabbing and eating (I should have snapped a pic of the dessert table, it was as popular as any of the featured items!)...er "networking." My dearest daughter, who now looks forward to these road trips as much as I do, is not much for socializing and snooping. She pulled out her Frederick the Literate and stitched away. The most common comment was about her young eyes.