Just a few more days before I'm leaving on that jet plane. I wish I could say my bags are packed and I'm ready to go, but I so hate lying. It's the big needlework convention in Nashville; this is the time to see in person all of the brand new stitching things and meet with all of the shop owners, designers, fabric and thread people.  It's not open to the public, but if you're tuned in to your social media you'll hear and see snippets of activity from all directions.

This is a round-up post, collecting all the pieces from my various leaks and filling in the blanks.

If you're on my newsletter mailing list, I previewed one of a series of three charts called Bite Me. In all, there are a Fur version (middle), a Fins (bottom) version, and a Feathers (top)version. 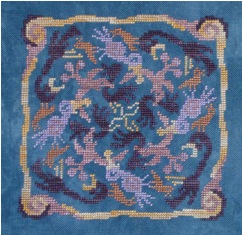 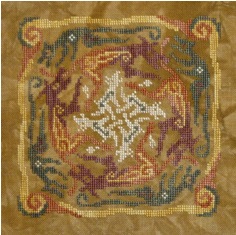 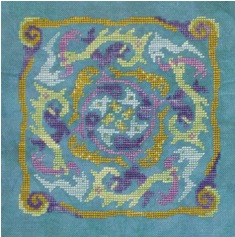 Here Comes Treble, which incidentally gave me nothing but trouble on every step of the way: Shy Violet got pulled forward in the release cycle because Treble was threatening to miss the print deadline. I think it came out so sweet - and I'm dying to try other color combos. Yes, Mel, it would look great on black. 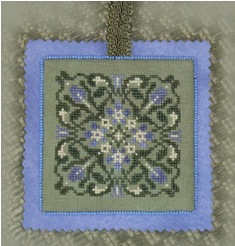 Here's a little kit I put together as a special release just for Nashville participants. It's a limited edition, so talk to your shops. It's called Fireweed. I finished it as a box top, and it's shown nestled in a pile of lovely silks. 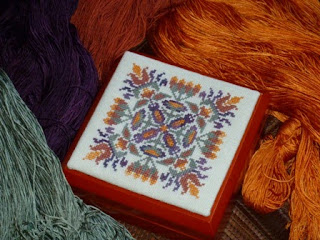 Last but not least, and technically not a Nashville release since I made it available to shops in January (but I guess everyone assumed it was a Nashville preview) here is a mandala for you to stitch: Just Rosy. 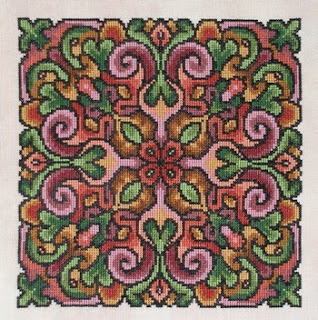