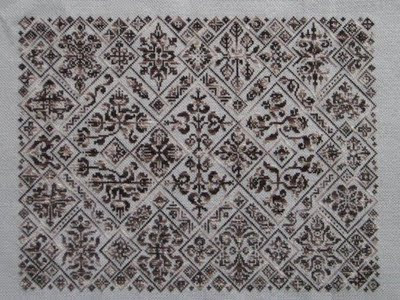 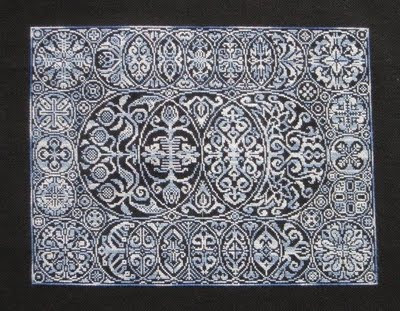 Her next 'trick' will be to get them framed so that neither one outshines the other -same frame, different mats, same frame, no mats??  The possibilities are headache-inducing but she is thankful to have an amazing needlework framer.
What an elegant pair. Lovely job, Anita.  So glad you shared.
Posted by Tracy at 10:30 1 comment:

Peg sent me this fabulous sea story that (thank goodness) ends most happily. In fact, you could say Peg and her Sea Stars lived happily Rensely after. 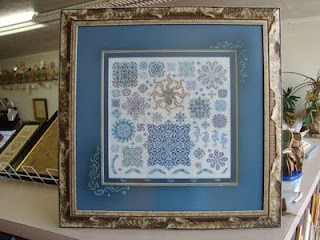 Peg had completed Sea Stars quite some time ago with HDF, all in different blues. She ironed it in preparation for taking it to the framer and put it in a Ziploc bag until she could make the trip.
When she was ready to go to the framer she pulled out the piece and to her absolute horror it was simply covered with mold and mildew. The fabric was imbedded with the awful stuff.
She washed and rinsed and washed and rinsed some more and finally got all of the mold out. To her dismay, some of the fibers ran. Her attempts to make it look better only made them run more and she gave up. She thought her once beautiful Sea Stars was destined to languished in the "finished" basket, never to be brought out because she couldn't bear to look at it.
Fast forward to Jubilee last fall. she was going and she wanted to take some pieces to hang in Vikki's booth. She took along Sea Stars just to show her. When she showed Vikki she grabbed it right away, and said she would take it home and see what she could do.
When Peg got the piece back from Vikki she had hand painted the painted the fabric and Peg was astonished to see that you not tell at all the fibers had run. Her Sea Stars was once again beautiful.
So beautiful, in fact, that she sent it to Jill Rensel for framing.
From these photos you can see what both Vikki and Jill Rensel did. (The original was on stark white fabric.) Is the frame not spectacular? Aren't the little engraved mat details outstanding? 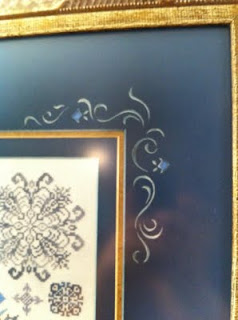 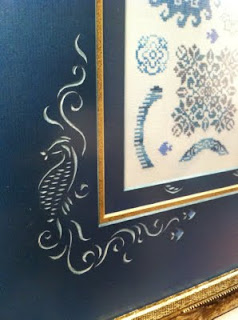 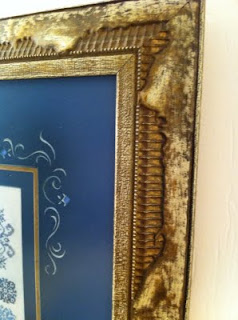 Wow, what a story.  I just love a happy ending
BTW, I have heard other stories of Vikki Clayton's rescue service being quite successful. If you've had a bad luck, I'd highly recommend a consultation with DV.
Posted by Tracy at 18:38 5 comments:

What's Black & White and Lucky All Over?

Cristin sent in this photo of her unique finish of Pot Luck. This is a Hand Dyed Fibers color aptly named Penguin.  She stitched with 1 strand of silk over 1 thread of Lugana.  What a bold and fun combination.  I live vicariously through the floss choices of others ;o) 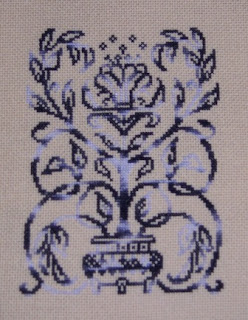 Cristin has been busy, as she also had finished Twisted Heart recently.  She personalized it with initials and a date to make a special treat. 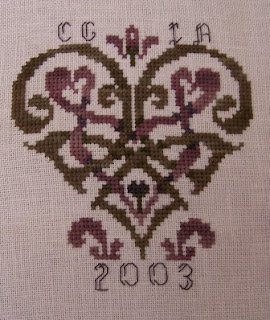 Now, what's red all over? Or maybe I should say who is red all over...That would be an embarrassed me.  When Cristin asked if I had received her Twisted Heart photo, I found it along with another finish of hers that I had somehow let slip to the murky depths of the inbox.  So, please also join me in a little happy dance for her Smell of Sulfur stitched up with mostly Vikki's HDF on 35 count linen also from HDF. 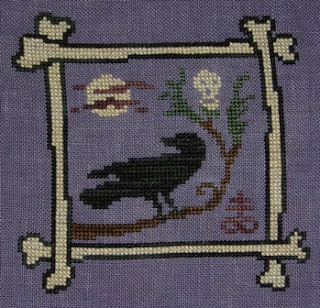