If you thought Kaleidoscope looked nice in 31 shades of DMC, imagine how spectacular it looks in Vikki Clayton's Hand-dyed silk. One of the big HDF advantages is that any pattern written for DMC can be converted directly to HDF. In addition to a whole array of lovely variegated floss colors, there is a direct match up for all of the DMC shades. 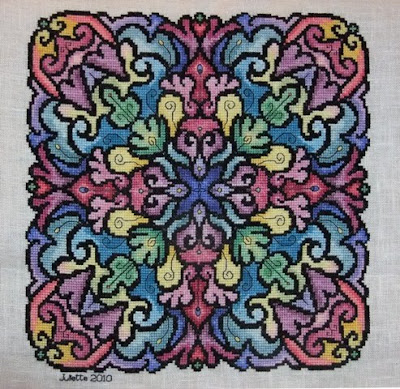 Juliette shares a photo of her chromatic masterpiece done with Vikki's silk on 36 count antique white linen with us here. Wow - that is beautiful.  Thanks for brightening my day, Juliette, and congrats on the spectacular finish.
Posted by Tracy at 07:08 7 comments:

Email ThisBlogThis!Share to TwitterShare to FacebookShare to Pinterest
Labels: Kaleidoscope

Well, I love this chart. Toni loved this chart. Some of you probably love it too.  Is that not a Love of Triangles? 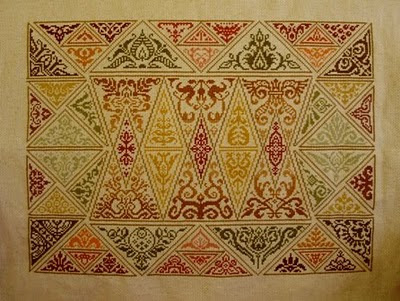 Toni took the monochromatic Cirque des Triangles chart and used a beautiful fall palette to color the individual triangles. Look at that symmetric gold to yellow shading in the center. Is that not exquisite?  What a beautiful balance of colors and shapes.  Thanks so much for sharing your photo finish with us, Toni!
Posted by Tracy at 18:55 4 comments: 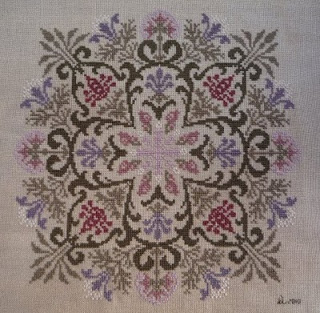 This is Karen's first Ink Circles design, Bloomers.  Let's join her in a little happy dance, then nod our heads solemnly and acknowledge the path of addiction that she has willfully stepped onto.

Just a note from me on how I had to scan my catalog page 3 times before finding Bloomers on it because the contrast in colors/fabric were so different than my version. Gotta love them all! Don't be shy about customizing.

BTW, if anyone wants to make the joke that they can see Karen's Bloomers - feel free. :o)

Thanks for sharing, Karen!  May you find many more little x's in your future.
Posted by Tracy at 13:27 3 comments:

Email ThisBlogThis!Share to TwitterShare to FacebookShare to Pinterest
Labels: Bloomers

A Tribute for James

Natalya won't have the chance to give her loving tribute to her fiance James. He had been battling leukemia since 2002.  After three rounds of fighting the cancer with courage and determination, he lost his battle to an infection that his weakened immune system just couldn't shake. When James passed away seven months before their planned wedding day, his body was cancer-free, a small consolation to them both. 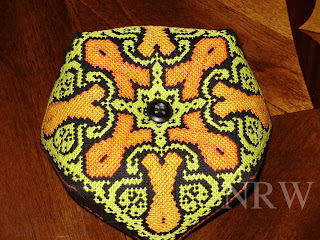 Orange is the awareness ribbon color for leukemia and lymphoma.  Against the black fabric, these bright colors just ring with a vibrancy and energy that must have reflected their life together.  Natalya used the time working on this biscornu as a chance for her to reflect on what had happened and how she could continue on. James is now her own personal angel and we hope to use his example to continue the fight for a cure. 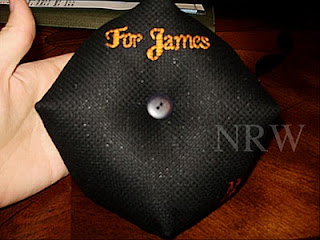 This chart is available for free here. I am honored to be connected in this small way to such stories of caring and strength. Thank you for sharing your story, Natalya.
Posted by Tracy at 12:51 2 comments:

It's never easy to know what to say to a friend who has recently been diagnosed with cancer or some other major life-affecting problem.   I think everyone has heard of the pink ribbon used for breast cancer awareness, but were you aware how many other ribbon colors have been adopted by various cause support groups?  I've been unable to pull up a single website that is all encompassing in it's table, but a little Googling will lead you to the color for which you are looking. 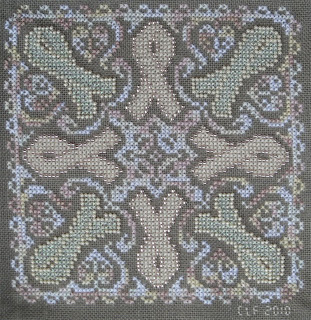 Sometimes a stitched token is a perfect gesture of understanding and caring. Christine's cousin was recently diagnosed with lung cancer, which is represented by a "pearl" ribbon. Christine had already worked this chart with the pink ribbons in the original design and a second time with yellow ribbons, so she knew how perfectly it adapts to other ribbon colors. This chart is a freebie I posted a few years back - you can download it here.
She worked with her LNS owner (Gitta's) to come up with this knockout combination.  She stitched it 2 over 2 on 32 count Belfast linen (cobblestone) using Anchor variegated 1302 for the lacework, and Anchor 276 and Kreinik 032 #4 braid (1 'strand') for the ribbons. The ribbon borders were done in Mill Hill Petite Glass Beads #42027 (pink metallic) and 40123 (pearl).
Christine did a beautiful job on this most personal masterpiece that her cousin will cherish as a special treasure. Thanks for sharing the picture of your finish, Christine.  I send my wishes to your cousin for strength and recovery.
Posted by Tracy at 08:43 1 comment: 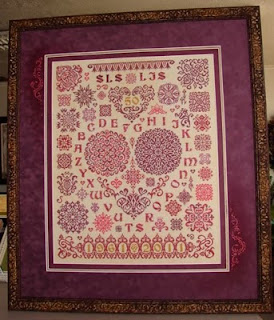 Fifty years ago, Sandy told Larry, "I Do." Coming up later this year, the happy couple will celebrate their golden anniversary.  Finishing this sampler was a rather big accomplishment, although it pales next to that of finding the right guy and hanging on to him through the ups and downs that fifty years of life together will bring.

This anniversary sampler is called "I Still Do."  I stitched it for my own 20th anniversary, but it can be easily customised for any dates and color schemes that work for your special year.  The chart also includes a non-anniversary motif layout.

Sandy used a variety of Vikki Clayton's hand-dyed silks in shades of reds for the motifs with gold silks for the numbers on a 36 count linen from R&R. To finish up this beautiful tribute in an equally beautiful way, Sandy enlisted the framing services of the one and only Jill Rensel.

Congratulations, Sandy, on finishing this wonderful piece - it it exquisite. And on a bigger note, congratulations to you and Larry.
Posted by Tracy at 09:36 3 comments:

Email ThisBlogThis!Share to TwitterShare to FacebookShare to Pinterest
Labels: I Still Do

Membership Has Its Privileges

Or so the old ad copy read.  Ink Circles has a mailing list that I use to update folks when new things are coming their way, events coming up, and sometimes to share a little love.  In a recent mailing I included a free cross stitch chart called Celtic Swirls.  The chart is still available to download for newcomer folks when they sign up for the newsletter (see the Ink Circles home page.) 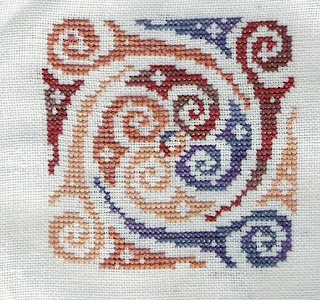 Julia stitched her version up quickly using silks from a D-Bag (detritus = left overs, end bits, unlabeled, and other mish mosh) of Vikki Clayton's Hand-Dyed Fiber. This type of pattern is a perfect way to use up some of those little extra bits of fiber. Once stitched, a small square like this can be finished up as a biscornu, an ornament, a needle book or a number of other goodies.  Thanks, Julia, for sharing your photo. It looks great!
Just a reminder for stitchers in Australia, the design will need to be reversed such that the spirals go in the other direction. Cheers.
Posted by Tracy at 13:44 11 comments: