The Next Big Thing

Often when I finish up a new piece, folks will ask me what the next big thing is.  With Reflections of Paris and Elegant Squid just released, I can honestly say the next thing is truly BIG. Bigger than anything I've ever done. I love it, and I hope you do too. Here is the story.

A few years ago I was introduced to a beautiful form of needlework called the Tampan Ship cloth that were woven in Sumatra in the 18th and 19th centuries. I'm not going to give a whole background, but I'll point you to a few articles that I enjoyed (1)(2)(3) for more info on their history.
The writings all indicated that these beautiful artifacts were no longer being made and the samples remaining were largely in tough shape, as they were actually used by the people who made them. Comparisons have been made with embroidered samplers, including the Dutch Amager samplers.  Of course one of the reasons I was drawn to these cloths was the complete use of the space. I like my needlework to be dense - look at my Ink Circles pieces and you won't find a lot of open areas. I like the way motifs fit together.

I decided I needed to make a cross stitch version of a Tampan cloth. It would be technically impossible and undesirable to make a direct reproduction of one for many reasons. The weaving has a different aspect ratio than cross stitch. Look at how many different line slopes there are! The cross stitch would have to be huge (we're talking a couple thousand stitches wide) to give a thread for thread reproduction.

Also, the repetition. That's a lot of big red fish. Many of these cloths include the same figures over and over, often doing a mirror image of the whole ship so it could be draped over a table/alter/coffin/? and be seen oriented correctly on both sides. Some of these cloths had to be made by the same person or school, as the designs are as identical as handwoven can get. I thought I was looking at two photos of the same cloth on this one until I started looking very closely. I took my initial layout from the twins below, but was soon scrounging other cloths for more interesting and diverse figures and motifs to substitute. 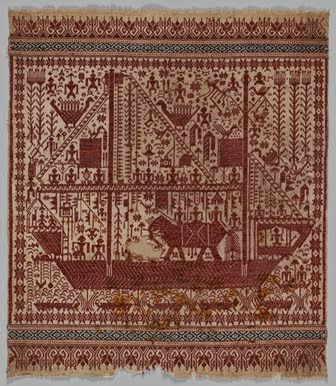 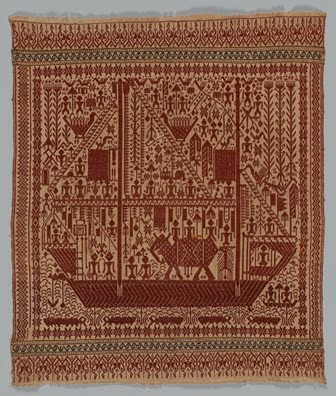 I couldn't resist all of the adorable and strange little animals that decorated the different cloths. Look at the alligator, and the little monkey things, bizarre camel birds, octopi, and godzilla. Look at the topmost picture in the post at the little flying goats/reindeer. Every inch has such interesting creatures. I suggest you Google the topic and spend a time looking at the highest res photos. 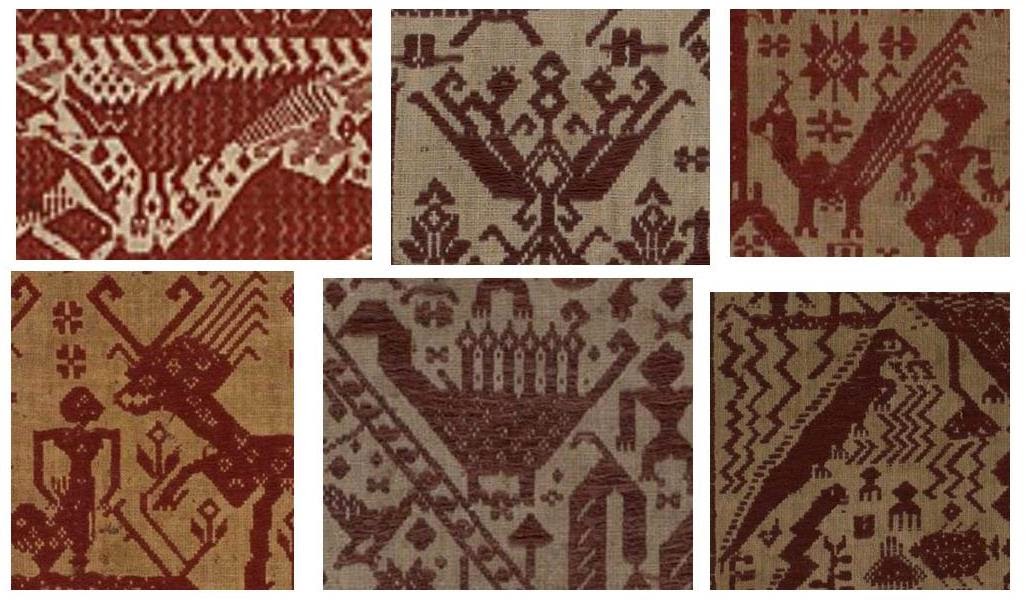 As I studied all of the images I could find (big thank you to all those universities and museums that have high resolution images of their entire collections!) I tried to make sense of what the images were. What were the people holding? Men with spears - were those the warriors? Are those ladies or just Hammer pants? Were those stringers of fish and drying herbs hanging everywhere? That must be an umbrella, and that a hut. Are those angry warriors brandishing their masculinity (a detail I chose to omit from my version?)  And little filler patterns, stars, and plants everywhere. 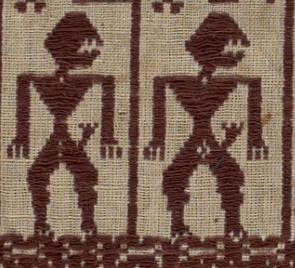 This is what I ended up with after months of inspired charting. I'm excited to order silks and get stitching. My big dilemma at this point is that it is large: 345 x 421 stitches, with about 62,000 x's. That is large enough that even many of my die-hard fans will take a pass on purchasing a chart. I think it would be prohibitively expensive to have a model stitcher help, given expected sales levels. I think it's going to be a fun stitch with so much variety and detail, but it's going to take me forever. So it maybe just a personal piece for now, but I love it. I know there are a lot of lovers of big red samplers out there that I can share it with someday.