Nashville Cats Are out of the Bag

What a wonderful trip and a great show TNNA trade show IMHO.  Coming home Monday was a bit exhausting (checking out of the hotel, returning the rental car, three airplane legs, digging the car out from the snow in Spokane, and a three hour drive to get home,) but we were fueled on enough show excitement, caffeine and chocolate to keep us running.  My boys were all happy to see us - Hubby, son, and Toaster dog- as were we, they.

As always it was great fun to see in person all of the people I normally only get to type at. Things were actually busy enough that I know I missed visiting with many folks.

I tried something new this show by not advertising ahead of time what the new releases were going to be, thinking this would give some advantage to the shops that paid the costs of attending the show.  It also gave them the fun of surprises.  Many of the shops actually bring their own scanners to the show for a midnight web update with new goodies! Since pictures of all three of my releases are already all over the internet (even in shops that didn't attend!) I figure there's no point in keeping things off my own site...

The Nashville Cats are out of the bag.

First up, Rosetta: This is your classic monochromatic, geometrical-based, no-punch-line Ink Circles design. It's shown in Gloriana silk in Cranberry on R&R Espresso Linen 40 count.  I'm certain we'll be seeing some great other fiber combinations from stitchers soon. 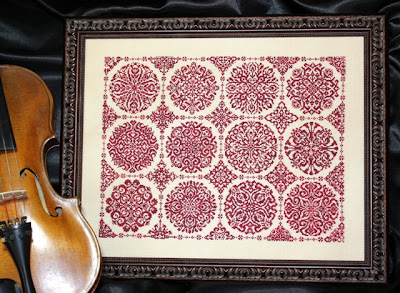 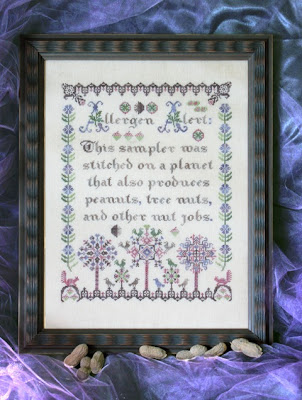 Believe me, I know that allergies are no joke, but I think we've gotten a little carried away with warning labels of all types. My inspiration for this sampler is below. If you can't read the label on this tube of printing INK, it says "gluten-free" in three languages! If you don't find that funny then I officially proclaim you as humorless or unable to help it due to some unfortunate circumstance such as employment as a product liability lawyer for some corporation. 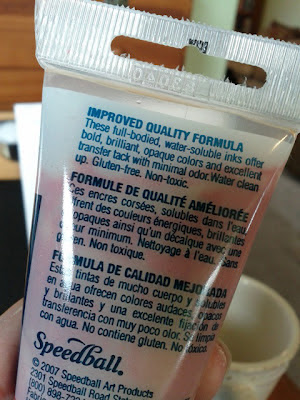 Earbuds. The third new piece is the culmination of all those tiny 10 x 10 album covers you might have seen on FaceBook.  Each of the little albums is mounted on a tiny neodymium magnet and a steel plate is behind the stitching. You can move the albums around to show "what's playing" on your MP3 player.  We are currently listening to some Rolling Stones.  If you want to see my ink drawing that started this concept, look here. Watch for a follow-on chart with more music selections. I had more than one person tell me I was the "nut job" after seeing this one. :-P 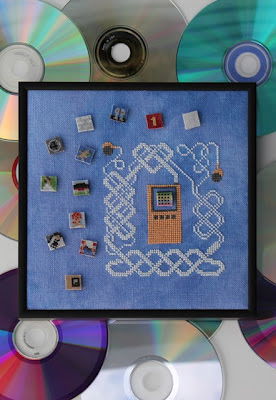 So look for these three new charts in your favorite shop ONLY. (It will be a long while before I offer them directly for retail order.) Have an awesome week.
Posted by Tracy at 14:10 8 comments: